Recently back from an overnight trip to Chicago to speak with their UX Book Club. My book Writing for Designers was the featured book, and they hosted a Q&A style event with the author, who is me! This was the first time I’ve been at an in-person event specifically because I wrote a book. I thought I’d be more nervous about it but I never really was, just excited. Blind dates and conference talks are more stressful.

When I first started speaking and embarking on my current career in earnest, around 2012, I was always looking at events like this and wondering: how does that work? Logistically and financially, I mean. Are authors getting paid to do Meetups? (LOL, no.) Are publishers paying to send them there? (LOL, no.) Are authors making enough on book sales from these appearances to justify the cost? (LOLOLOL. No.) For my niche industry book and where I’m at in my career, none of those things were the case. Turns out it’s just a lot of asking people nicely for a bit of help.

As part of the pre-launch marketing for my book, I sent lightly-customized emails to several hundred people (about half of my LinkedIn connections) to say a bit about the book and ask for help. My friend Cate Kompare, a lovely human that I coincidentally met at a different UX book club in Champaign-Urbana many years ago, replied to say that her employer Solstice has been hosting more events, and asked what it would cost to get me out there. I quoted a modest appearance fee for a private event, and said that I could also do it for just travel reimbursement for a public event. They were able to do the latter, and Cate coordinated co-presenting it through the UX Book Club Chicago. Kristina and Brain Traffic have been very supportive, and were happy to handle invoicing my expenses and giving me the time to get down there.

I smashed the trip right into my work schedule. I had a conference call Tuesday morning up until I needed to leave for the airport, and did a bit of work in the afternoon at Solstice before the Meetup started. I was back in the office around 11:30 the next day, and right back to work.

The flight was about $250, the hotel about $175, and three Lyft rides totaling around $80. I paid for food on my own and took the light rail and bus home from the airport to land closer to the $500 in travel expenses estimate I’d given Cate. (And if I’m not in a hurry, I prefer taking the train home anyway.) 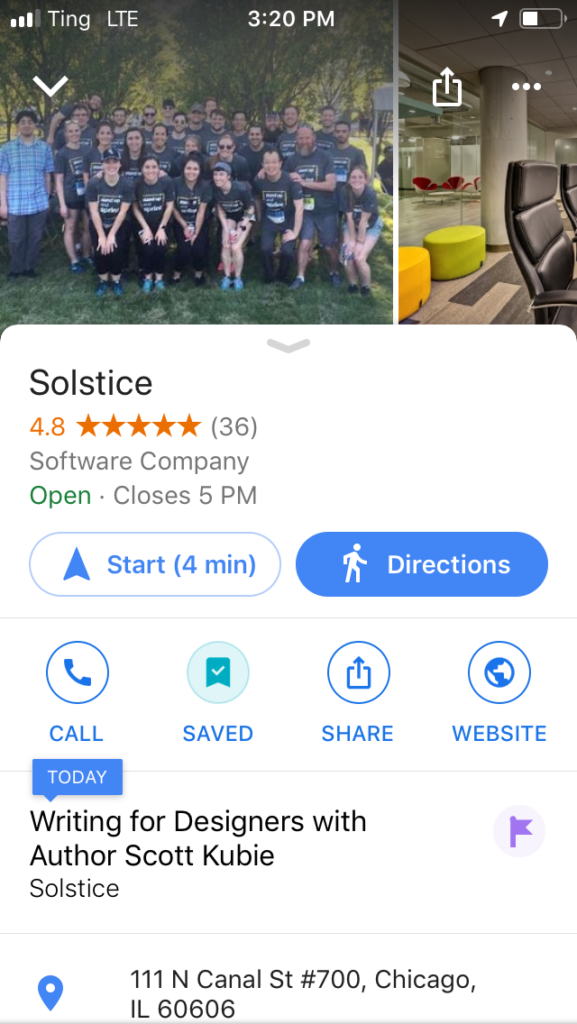 A couple of days before the event, Cate asked if I’d want to set up a merch table or other sort of display. A totally smart question that caught me off guard. Shit! It’s an ebook! I don’t have, like, a thing! Luckily I still had some A Book Apart buttons and stickers from my launch event in Minneapolis. I made a little display of them and some of my Brain Traffic business cards next to the pizza laid out for the meetup. I’m thinking I might want to get a little poster in a photo frame and a newsletter sign-up sheet on a clipboard, maybe some postcards, for future events. It’s not all that important if people even sign up or take your card, but it does help to make things look more “official” and put together.

Cate and Shane (one of the Meetup organizers) prepared some excellent questions. There were also great ad-hoc questions from the audience. I tried to stick to my guns of only answering questions I felt like I could really answer, and saying “I don’t know” for the rest, but I did feel a pressure I haven’t really felt before to be the expert. I don’t think this was a good instinct, necessarily, but I did feel liberated to speak with a bit more passion and conviction than maybe I have in the past. If people don’t like my answers they can yell at me on Twitter! I know I turned around at least one question about content testing that I don’t have as much experience with to the audience.

On Back to Work, Merlin has talked several times about the “ten times more” metric. The gist is: look at something in your life and ask if you’d want ten times more of that. For instance, I had a bit of fun buying and selling vintage clothing at pop-up markets and filling orders on Etsy, but not so much fun that I wanted ten times more of it. Realizing that made me it easier to let go of when it became too much.

So that’s what I’m chewing on now, after an event like this. Do I want ten times more writing books, going to meetups, talking to people who care about this stuff as much as I do? I’m leaning towards yes.

Extremely grateful to Cate, everyone else at Solstice whose names I’ve already forgotten (sorry!), Shane and the Chicago UX Book Club, and everyone who came out. Let’s do it again sometime!

This is kubie.co, the online home of Scott Kubie, a designer who writes. Scott is the author of Writing for Designers and publishes the weekly UX Writing Events newsletter.

Periodic updates on my life, work, and projects.